16 FEV 2017, 18h | Conference “Transformations of Labour and the Dynamics of Governance by Numbers”, with Alain Supiot 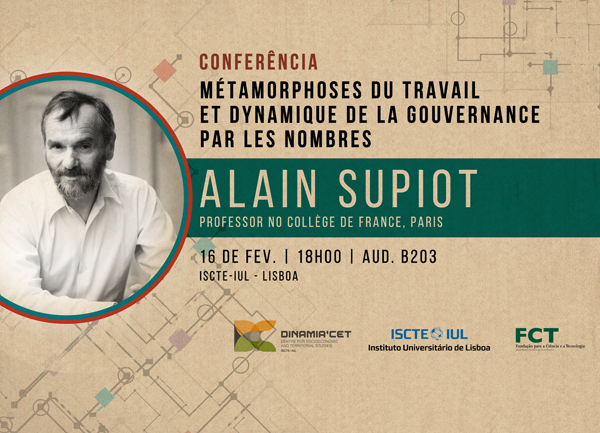 The organization of work is no longer based on the division of labor between managers and subordinates, nor on the decomposition of their work into a set of simple and measurable operations. Rather, it seeks to mobilize the capacities of all workers, including leaders. Some like the others must be reactive and achieve the quantified objectives assigned to them. In legal terms, this new conception of work means going beyond the opposition between autonomy and submission of the will. The organization of industrial work was based on the distinction between independent work and wage labor and on the subordination of those directed to the leaders. Post industrial work is based on everyone’s programming.

The conference will be delivered in French and the debate will be multilingual.

Will be developed themes recently presented in the text What International Social Justice in the Twenty-First Century?

Doctoral degree in Law (Bordeaux, 1979), professor of law (1980), honorary doctor of the University of Louvain-La-Neuve and corresponding member of the British Academy (2015). Alain Supiot was professor at the University of Poitiers, University of Nantes (UMR-CNRS 6028) and member of the Institut universitaire de France (2001), before being elected to the Collège de France in 2012. Between 1998 and 2000 he presided over the National Development Council Human and Social Sciences [France].

His career was marked by several years of research abroad (1981: Institute of Industrial Relations of Berkeley, 1989/90: European University Institute of Florence, 1997/98: Wissenschaftskolleg zu Berlin). In Nantes he founded in 1995 the Maison des Sciences de l’Homme Ange Guépin, and, in 2008, the Institut d’études avancées, which hosts jointly scientists from the ‘South’ and ‘North’ countries. After leading this Institute between 2008 and 2013, he is now president of its Strategic Committee.

Alain Supiot published individually or in collaboration 24 books, including several translated in foreign languages, and participated in 45 collective works. He is the author of 71 articles in French and 85 in foreign languages. His investigations have developed in two complementary fields: social law and the theory of law.

19.30
Lunching of the book by Alain Supiot, Crítica do direito do trabalho, edited by Foundation Calouste Gulbenkian