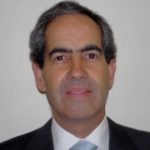 Abílio Pires Zacarias holds a degree in Organization and Management of Companies by ISE, Technical University of Lisbon in 1983, MBA-International Management by FCEE, Portuguese Catholic University in 1993, and PhD in Business Administration and International Commerce by FCEyE by University of Extremadura in 2014. The PhD work was distributed by Portugal and Spain, in the area of Business Strategy, and obtained the title of European Doctor, by the same University. In professional business terms, he was administrative and financial director at Munditrading, Ltd. between 1983 and 1985 and financial auditor at Arthur Young & Co. from 1984 to 1986. From 1986 to 1988, he was a technical economist at the National Development Bank and account executive of major companies at Barclays Bank between 1988 and 1990. Later he was commercial/marketing manager at Generale de Bank and commercial director at Banco Português de Negócios between 1990 and 1995 and 1995 and 2000, respectively. He is currently a professor at ISEG/Universidade de Lisboa, having started his academic career at the European University in 1989. He is part of the Management Department, teaching several courses in Marketing and Strategy, in IDEFE and training centers. He is an ADVANCE researcher, developing research in the scientific domains of business strategy, with special emphasis on corporate governance and marketing. He has supervised master's dissertations and assumed the role of ISI journal reviewer.