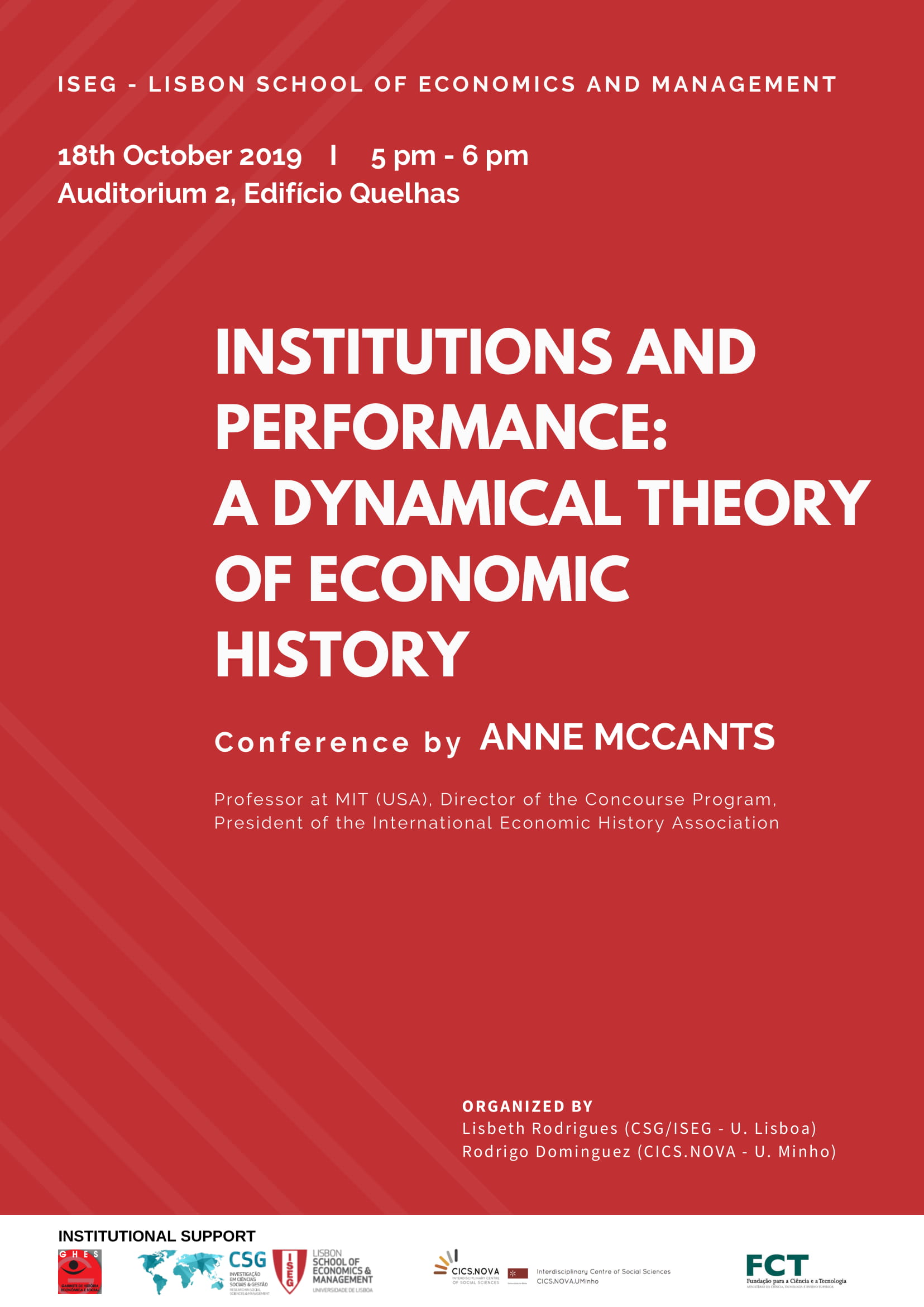 ISEG – Lisbon School of Economics and Management hosts, at 18th of October 2019, at 5 p.m., the Conference “Institutions and Performance: A Dynamical Theory of Economic History”, with the keynote speaker Anne MacCants (MIT, USA).

Anne McCants is a Margaret MacVicar Faculty Fellow and Professor of History at MIT, and currently serves as the President of the International Economic History Association.

A central problem of Economic History is to explain the gross disparities in the current global distribution of economic outcomes, and to assess distributional persistence over time.  In addressing these questions nearly 30 years ago Douglass North argued that institutions are the rules of the game, that they set the parameters in which economies flourish or not. Followers of this maxim abound.  Yet the central questions remain unresolved. We neither understand where the seemingly beneficial institutions come from, nor how susceptible they are to change, or even how we should adequately measure them. For North, institutions consist of both informal, slowly changing cultural norms as well as roads, guilds, justice systems, and other such infrastructure that can be purchased with wealth and change quickly, sometimes even overnight as with enforceable legislation. This mixing of the static and the dynamic is unsuited to the inherently time-dependent problem of economic development.

We offer here a dynamical theory of economic development that recognizes the critical difference between institutions as infrastructure and institutions as norms.  We identify the former as the humanly devised systems that promote growth in the economy, and in equilibrium keep pace with the economy because they require economic resources to build and maintain. Norms, on the other hand, are the slowly changing codes of conduct, traditions, convention, and taboos that bear, positively or negatively, on both economic outcomes and institutional change. A dynamical theory of development that accounts for this distinction and allows the economy and institutions to co-evolve offers a compelling account for both the source and persistence of economic and institutional disparities across polities. Wealth, longevity, human capital, and political and social stability, are all outcomes of a dynamic historical process, itself dependent on norms, among other widely recognized input variables.